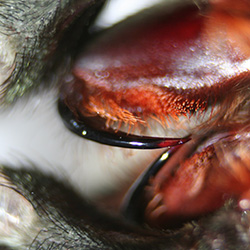 If you follow the scientific press at all, you may well have come across this story over the last couple of weeks.  Some interesting research into the venom of some australian tarantulas has shown potential for a new form of natural insecticide.

Typically the venom of spiders (or any venomous animal for that matter) tends to to effective only if injected (by a bite or sting) which is why, in general, it’s incorrect to call spiders “poisonous” rather than venomous (poison is a toxin which is ingested, venom is one which is injected).  However, recently published research suggest that a protein found in some australian tarantula venom can also kill prey insects when they ingest it, leading to the possibility that if sprayed on crops it could be used as an effective and natural insecticide.

The findings were published by Glen King and Maggie Hardy of the Institute of Molecular Bioscience at the University of Queensland, and could prove extremely useful in the control of the cotton bollworm, which is considered an important agricultural pest which attacks crops and is currently controlled with a synthetic chemical insecticide.

The authors of the published research hope that the findings could lead to the creation of bio-insecticides, or that gene encoding of the proteins could facilitate the creation of insect-resistant crop plants.

For more info, read the article at ScientificComputing.com