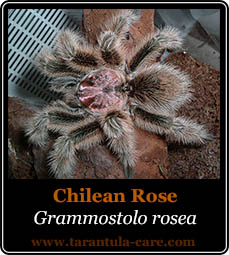 Temperament: Often docile species, but some specimens can be temperamental.

Often touted as an “ideal beginner tarantula” the Chilean Rose has been one of the most popular tarantulas with amateur arachnoculturists for the past three  decades.  Their popularity stems from being a very hardy species, tolerant to a wide range of conditions, and often being tolerant to handling, though some can be defensive.  Their popularity is also due to the fact that adult and sub-adult specimens are relatively cheap.  Unhindered by the CITES status of tarantulas in the Brachypelma genus, these are still exported to the US and Europe in large numbers, while at the same time slings are readily available due to successful captive breeding. This has led to them being probably the most widely kept of all tarantula species.

This medium sized but full bodied terrestrial tarantula gets its name from the red/pink hairs covering a fairly dully coloured body.  Several colour forms exist, which were originally thought to be different species, and has led to some confusion in both the binomial and common names (i.e. G.cala as Chilean Flame) while they are now considered one species (in fact different color forms can come from the same eggsac) with the binomial name G.rosea, and the official AAS common name as Chilean rose.

As evidenced by their enduring popularity, G. rosea can make an excellent pet.  However, there are mixed feelings by enthusiasts as to whether they are an ideal beginner species.  On the one hand they are exceptionally hardy, and it’s almost difficult to make a mistake in keeping this species – they will thrive in a wide range of conditions, so any keeper who has done proper research on keeping tarantulas will probably be able to provide suitable care.  On the other hand, while generally docile they can be temperamental, and they have a reputation for being “pet rocks”.  In fact they often go for extended periods without moving, and have a tendency to fast for long periods of time (sometimes months!) which can be disconcerting, especially to the first time tarantula keeper.  Some specimens also break all the rules and do the complete opposite – they never seem to stay still!  These “wanderers” have periods when they are over active, and will tend to climb excessively often at risk of injury from a fall, depending on enclosure setup.  My advice, would be to think about a Chilean rose to raise from a sling, after getting a little experience with another species (which is actually what I did) but either way, if you are considering G.rosea then please read this excellent article at tarantulas.com first, it’s one of the best pieces I’ve read on the subject and highly informative, going into detail on the particular issues with this species.

For general care requirements, read the beginner’s guide to tarantula care page which gives a good overview of tarantula husbandry, but do also refer specifically to the article linked to in the paragraph above!

The Chilean rose is a ground dwelling burrower, so you will need a glass or plastic enclosure with more floor space than height, with a deep, generally dry substrate (at least 2 – 3 inches of coconut coir, or dry potting soil), and plenty of ventilation.  Provide a hiding place (such as half a flower pot, coconut shell, or a piece of cork bark) at one end of the enclosure, and a shallow water dish at the other.  They don’t like a damp substrate, or high humidity but so long as your enclosure is large enough, keep the water dish at one end and when you fill it, overfill it slightly to moisten the substrate.  This will create one end of the enclosure (opposite end to the hide) with higher humidity, which can help prevent dehydration if your spider decides to fast.

A diet of crickets, cockroaches and locusts is ideal.  As with all tarantulas, feed prey items of a suitable size – no larger than the spider’s abdomen. They are also prone to being over fed as adults, so avoid the temptation to offer more food than necessary.  A healthy, adult will only eat 6 – 8 adults crickets a month, much more than that can cause obesity problems.

If you’ve found this site then there’s a very good chance you’re thinking about getting your first tarantula. I remember very well being in that exact situation, and trying to get my head around the minefield of information out there, so I wanted to add a post here very quickly which helped the newcomer to the hobby make the RIGHT decision early on, and avoid some of the pitfalls!

Therefore, I’ve decided to share some of the best resources I found when I was looking at getting my first T in the hope that you’ll find them as useful as I did!

The basics of tarantula husbandry

The very best advice I can give a newcomer to the hobby, is to read as much as you can on the subject before buying your first tarantula. Depending on the species, age, and sex of tarantula you buy you could end up with an animal which you’ll have for the next 15 – 20 years or more! You’ll also be keeping a venomous animal, and one which has the potential to escape if you’re not careful, and one with very different care requirements to more “typical” pets such as cats, dogs, or hamsters! So please, do yourself a favour and do as much research now as you can, it really will help set you up for success.

To start you on the right path, read this Basic Tarantula Care article over at tarantulas.com It will cover a lot of the basics about housing and caring for your first tarantula!

One of the most common questions I see from beginners on the forums is “what is the best beginner species of tarantula”. Well there really isn’t one definitive answer, and this will certainly be the topic of a future article on this site. In the meantime though, this short article from thespidershop.co.uk gives a few suitable choices:

Suitable species for your first tarantula

This certainly isn’t a definitive list (others such as Brachypemla albiceps – Mexican Golden Red Rump come to mind!) but they are all terrestrial, new world tarantulas which will be relatively easy to care for, generally slow moving and non-aggressive, and with mild venom. I would certainly recommend reading much more about any of these species which you like the sound of, but this is a good starting place!  Once you have an idea of what species you’re interested in, and have done your research on tarantula husbandry, your next task will be reading up on how to buy a tarantula.

Where to go for help

I intend to put a resources page together on this site and add to it over time, but for now here are a few of the resources I found invaluable when I was first researching tarantulas and trying to decide which species to start with:

RFUK – Being a long time reptile keeper, Reptile Forums UK was one of my first stops when I started researching tarantulas. As the name suggests, these forums are mostly about reptiles but they have an excellent spiders and inverts forum with a very knowledgeable community. 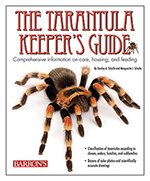 The Tarantula Keeper’s Guide – Of all the books on tarantulas I’ve read, this one is by far the most useful to the beginner keeper. It’s packed with great info, and it’s not too expensive. If you only ever buy one book on tarantulas get this one!

The British Tarantula Society – If you’re in the UK then I definitely recommend joining the BTS. For about £15 a year you get access to their journal and lots of great information. Even if you don’t join, there is lots of great free info on their website. If you’re not in the UK, they do international membership, or see if there is a tarantula society in your own country. For those of you in the US, The American Tarantula society can be found at http://atshq.org

My hope this that over time this site will become a valued resource for tarantula keepers and beginners, just like some of the resources listed above. In the meantime though, I hope you find these links as useful as I did when I first started.