This week marks a year since I took my first major step towards conquering my irrational fear of spiders, and the beginning of my journey into the world of the tarantula enthusiast.  I won’t go into details about my arachnophobia because I’ve blogged about it before in my post about overcoming arachnophobia, but I do want to post an update about how far I’ve come.

When we got our first tarantula (a tiny, baby, Mexican Red Knee sling) my wife had to transfer it into it’s (secure) enclosure while I stood at the other end of the room – if the lid was off the enclosure for feeding of any other reason, I couldn’t get any closer than a few steps away. 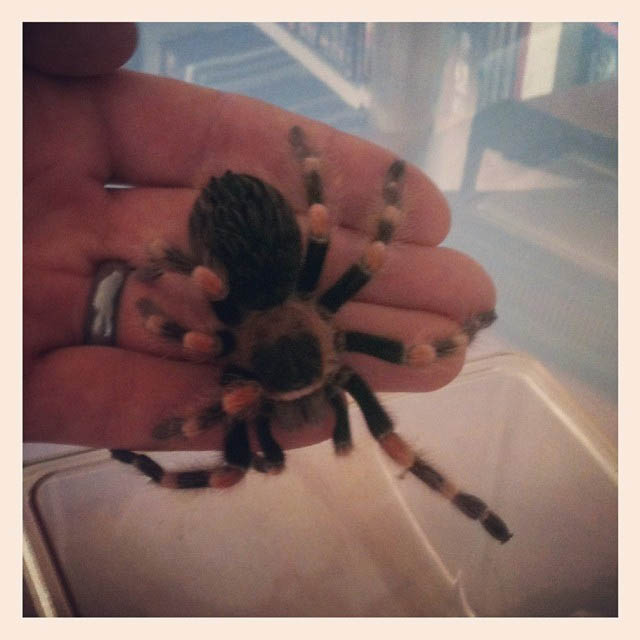 This picture, taken this morning, shows just how far I’ve come.  I’m not “cured”, I still consider myself to be somewhat arachnophobic, and I get a serious adrenaline rush even handling this juvenile let alone an adult tarantula, but the mere fact that I’m able to do it at all is a clear indication of the massive progress I’ve made and what a year of desensitisation can do.  If someone had told me 18 months ago that I could handle a tarantula I’d never have believed them!

Since first blogging about how tarantulas have enabled me to control my fear of spiders I’ve had lots of emails and comments from people who want to beat their own fear, so hopefully this post will prove to those people that they can do it too.  I’m not suggesting everyone with a crippling fear of spiders should rush out and by a tarantula – far from it.  But the point I want to make is, no matter what your fear is, you can beat it if you want to.  Fear isn’t “real” it’s just signals in your brain.  Those signals were essential to our evolution as a species, they kept us out of danger, but with an irrational fear they are misfiring.  A house spider crawling up the bedroom wall isn’t going to kill you, but the brain of an arachnophobe acts as though it is.  With determination, persistence and patience however, and a willingness to get out of your comfort zone and face that fear head on, you can override those misfiring signals and regain control of your feelings.

Note – please don’t think that I’m trying to advocate handling of tarantulas with this post.  Handling of any species comes at a risk to both the spider, and the handler and those risks should be fully understood before considering handling of any tarantula.  The only way to fully minimise the risk to both keeper and spider is simply not to do it.