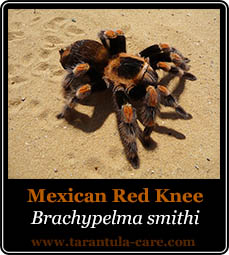 Temperament: A generally docile species, though many will flick hairs quite readily.

The beautiful Mexican Red Knee is the most iconic of all tarantula species, having been a popular pet species, and its appearance in a number of Hollywood movies and TV shows including Home Alone, Raiders of the Lost Ark, and several James Bond films to name just a few.

One look at this impressive tarantula and it’s easy to see why it’s so popular.  A large, robust looking spider with bright banded coloration, from deep blacks to oranges and the distinctive dark orange or red colour on the legs.  Females are full bodied and reach a leg span of around 15cm (6 inches).  They are also believed to be one of the longest living species, with females living 25 years or more in captivity.

They were once by far the most popular species of tarantula. but the entire brachypelma genus were added to appendix II of the Convention on International Trade in Endangered Species (CITES) treaty in 1985, which prevented their export from Mexico, and effectively stopped international trade.  However, B. smithi breeds quite readily in captivity, so it’s still widely available though adult specimens in particular are markedly more expensive than some other tarantulas.

Keeping B. Smithi in Captivity

B. smithi makes a hardy and low maintenance pet.  As a terrestrial, new world species with low humidity requirements, the Mexican Redknee is one of the simplest tarantulas to care for, and is suitable for beginners to the hobby.

For general care requirements, read the beginner’s guide to tarantula care page which gives a good overview of tarantula husbandry.

As a ground dwelling burrower, your redknee will need a glass or plastic enclosure with more floor space than height, with a deep dry substrate (2 – 3 inches of coconut coir, or dry potting soil), and plenty of ventilation.  Provide a hiding place (such as half a flower pot, coconut shell, or a piece of cork bark), and a shallow water dish.  Brachypelma species don’t like high humidity (around 50% – 60% is ideal) so don’t mist or spray, but always have a small dish of fresh water available. 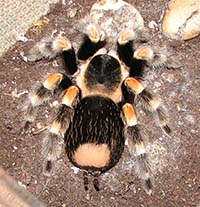 A diet of crickets, cockroaches and locusts is ideal.  As with all tarantulas, feed prey items of a suitable size – no larger than the spider’s abdomen.  Redknees tend to be good eaters, so if they seem uninterested in food you can be fairly sure they will soon moult.  Since they like to flick hairs, there will likely be a bald spot on the abdomen and this will darken in premoult (picture shows a bald spot on a female red knee, when in premoult this will look a lot darker).

Distribution and Natural History of Mexican Species of Brachypelma and Brachypelmides
A. Locht, M. Yanez and I. Vazquez – JOURNAL OF ARACHNOLOGY, 1999 (PDF)

Brachypelma smithi in the wild – www.mantid.nl