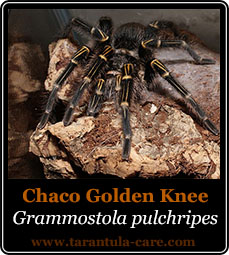 Temperament: A generally calm and docile species, suitable for beginners though care should be taken due to their large size.

Deriving its common name from the golden stripe on each knee (its former latin name was Aureostriata, meaning “golden striped”) this beautiful species grows to an impressive size, yet tends to be calm and docile.  They are a new world terrestrial tarantula, and opportunistic burrower.   They are reported to be one of the fastest growing species in the Grammostola genus, and they also tend to be quite active, though they tend to prefer using an existing hide rather than digging a burrow.  Combined with their striking looks, their generally calm nature and impressive size, and the fact that they tend not to be shy of staying out on display makes them a desirable species both for the beginner tarantula keeper, and for more experienced keepers looking to add a new impressive spider to their collection.

G. pulchripes is often misidentified as Eupalaestrus campestratus (the Pink Zebra Tarantula) which live in the same region.  Chacos coming from Argentina are less hairy than specimens from the Paraguay population, and it’s thought that there may be a third population in Uraguay. 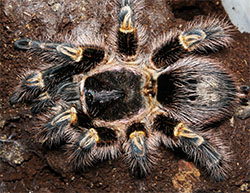 G. Pulchripes, as already mentioned, makes an excellent choice as a first tarantula species.  They are generally low maintenance with no special care requirements, and will thrive given the standard husbandry for generally arid, terrestrial species so long as they are given an enlcosure large enough for such a big tarantula.

An adult Chaco Golden Knee will require a large enclosure such as a large plastic or acrylic tank, or a 10 – 15 gallon aquarium with a suitable top.  Provide a deep, fairly dry substrate (4 – 5 inches of coconut coir, or dry potting soil), plenty of ventilation, and a secure lid.  A large piece of cork bark will serve as a suitable hiding place (half a coconut shell won’t be large enough for an adult!), and a large shallow water dish should be provided at one end of the enclosure which can be overfilled to dampen the substrate slightly at one end of the tank.

A diet of large crickets, cockroaches and locusts is ideal.  But as with all tarantulas, feed prey items of a suitable size – no larger than the spider’s abdomen.

One of the attractions of G. pulchripes for some people is their tolerance to being handled.  It’s true that this species in general tend to be docile and fairly tolerant to handling, but remember that every individual tarantula is different and that this species can be fast.  While its venom is mild and this species rarely bites, the fangs on a spider this large are more than capable of doing real damage.  At the same time, a fall from even a very small height would easily kill a tarantula of this weight so handle carefully, only if you understand and accept the risks to both yourself and your tarantula.