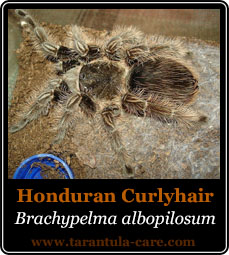 Range: The east of Honduras, Nicaragua, and Costa Rica

Habitat: Scrubland, brush, and the edges of forest

Temperament: A very docile species, one of the most handleable tarantulas

The curlyhair gets its name, as you might expect, from the exceptionally long and curly hairs covering its plump body and legs, giving a very distinctive look to offset its rather drab colouration.

Being CITES II listed, as all Brachypelma species are, hasn’t prevented this wonderful tarantula from becoming very popular with keepers, primarily due to their docile nature and tolerance to handling. Most keepers report that their specimens are among the most tractable of all tarantulas, almost never acting skittish or defensive, making them an ideal beginner species. They do have urticating hairs, but they are not quick to flick them.

B. albopilosum breeds readily in captivity, so slings and juveniles are easily obtained and relatively cheap, though like all Brachypelma species adults will tend to be more expensive. They are a hardy species, and faster growing than some other Brachypelma species such as the popular Redknee (B. smithi) which only adds to their popularity. While it’s true they don’t have the beautiful coloration of species such as B. smithi, or even G. rosea, and their unique curly hairs can make them look somewhat “scruffy”, that only adds to their charm and any would be tarantula keeper could do far worse than starting out with one of these wonderful Ts.

As a medium/large terrestrial T and an opportunistic burrower, a curlyhair will need a glass or plastic enclosure with more floor space than height, with a deep dry substrate (2 – 3 inches of coconut coir, or dry potting soil), and plenty of ventilation. Provide a hiding place (such as half a flower pot, coconut shell, or a piece of cork bark), and a shallow water dish. In my experience B. albopilosum tend to be heavier webbers than other Brachypelma species. They don’t like high humidity (around 50% – 60% is ideal) so don’t mist or spray for adults, but always have a small dish of fresh water available.